Branka Zaric on humanitarian auctions: “It is enough that only one person follows your example”

On the occasion of the six months of the existence of the Facebook group Be humane - humanitarian auction, we talked to the administrator Branka Zarich.

How did you come up with the idea to start a group? Can you tell us a little more about your work?

For three years now, I have been doing auctions for humanitarian purposes on my personal Facebook profile. Everything that I didn’t need and I thought it could mean something to someone – I put it up for auction and redirected the money from the payment to the users of the Be Humane Foundation. A few months ago, people started sending me pictures of things en masse so that I could put them in their place and help them sell – also for humanitarian purposes. At the beginning, it was easy and interesting, but the number of posts I posted soon reached 100 per day, and that is where the idea of ​​a group was born where everyone could post what they want. The group was formed on May 14, 2020 and already has more than 192,000 members. The number is growing day by day by 1000-2000. The group currently employs over 80 administrators, who are in charge of work and order. Both from Serbia and the diaspora – we have team members and group members, we have great support from all sides and we cooperate very well. There are between 2,500 and 2,800 new posts a day, and thus we come to the figure of 7,000 to 10,000 euros, which is collected in our group within just 24 hours.

The group operates on the principle of auctions: they last 24 hours, and after the expiration of the auction, the administrators announce the winners, who have 48 hours to make a payment to the user’s account, and then there is an agreement on handover.

We also have prize games that work on the principle of sending messages and posting a picture of the sent message as proof that the payment has been made, and after 48 hours we draw one lucky winner.

Sweepstakes have experienced a big boom in our group and we have a waiting list for some users until the beginning of December. There were various prizes, and it is certainly worth mentioning some of them – several laptops, cash prizes of 100 euros each, mobile phones, children’s equipment and toys, home appliances, TVs, gadgets, perfumes and watches and everything else interesting.

Which moment since the formation of the group was especially touching and important for you?

Every day is a new challenge, a new hope for the users, and also a fear of whether the necessary money will be collected on time… But a day full of such events, fears and happiness is a very successful day in the end.
The whole team works hard and there is always someone who can help, advise, guide… Important and touching moments are certainly those when the users for whom we raise money call us to tell us that we managed to raise funds for them, such moments remain forever in memory and nothing can be measured with that feeling of happiness when you know that you have done something wonderful and beautiful for someone, then our heart will be as big as the universe.

One of our greatest successes, which we are immensely proud of, is the case of Jelica, who has been in the foundation since its founding, and we managed to collect the money for the case – we managed to collect funds they were asking for in a period of 6 years in 3 days. Jelica is much better now, after she had undergone stem cell treatment. 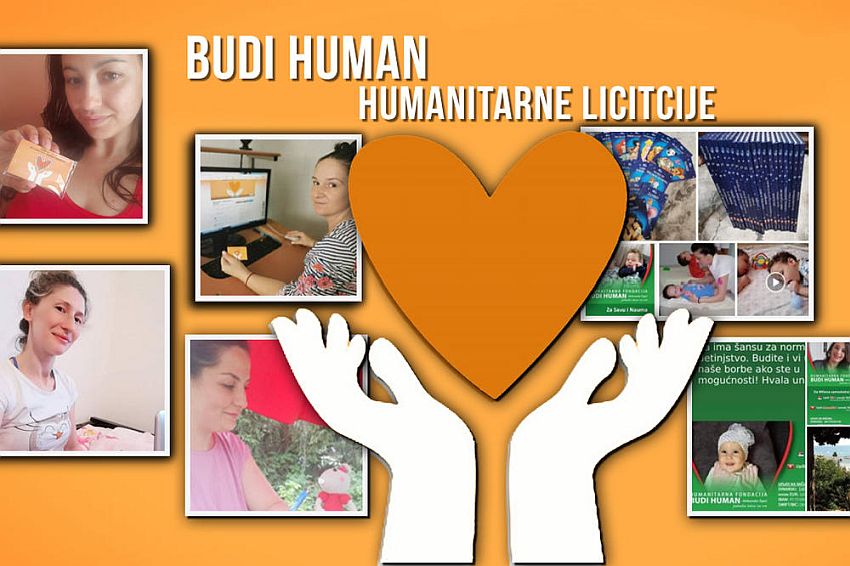 It can often be heard that we have become alienated and lack compassion. Does this group change that image?

What can be seen in this group is that we all lacked a little of that incentive to be better people. As much as we are humane and whether or not we want to show it publicly, now we all know how important it is to truly help those who need aid and assistance. It is enough that only one person follows your example and you have done a double good deed. And so it becomes a chain of beautiful things that bring joy into our lives. When founding the group, none of us even thought that the group would experience such success, we calculated that in a few years there would be only a few thousand people interested in this type of help, but the members reassured us and showed how humane people really are!

How did the coronavirus situation affect the work of the group, if so?

I think that it is more or less the reason why we exist and it is basically responsible for the formation of the group, because everything started from sitting at home, from the ban on going out, socializing…

Do you have information on how many people and children traveled for treatment thanks to the auctions in the group Be Humane – humanitarian auctions?

So far, we have managed to raise money for the treatment of over 20 people. We are extremely proud of that fact. For some users and more than once: for therapies they receive on a monthly basis. When I say me, I mean the part of the money that is collected through our group, but certainly we are not the only ones responsible for raising money for users. We collect an extremely large amount of money on a daily basis, mentioned above, and we are just starting to collect funds easier and faster than before.

What would you like the group to achieve in the future?

We want to continue doing things as the ones that we have achieved so far. The group will exist as long as it is needed. It is sad that we need a Facebook group like this one, but when it already exists, we must use its potentials in the best possible way. I invite everyone interested to be part of such a large team, every cent is important, whether it is 200 dinars, or 2000, or 20,000 and more – it is equally important!