Susan Brownell Anthony was an activist, abolitionist, and suffragette. Throughout her life, she has advocated for civil rights and the right to education regardless of skin color and gender, and is largely credited with passing the 19th Amendment, which gave women the right to vote in the United States.

Her most famous quote from 1893: “Organization, agitation, education, it must be our battle cry!”

She was born on February 15th, 1820, in Adams, Massachusetts. She adopted a solid moral compass very early on and spent most of her life working for social purposes. Anthony was the second oldest child in a Quaker family with eight children. The family moved to Battenville, New York, in 1826, and Susan was soon sent to a Quaker school near Philadelphia. After her father’s cotton clothing factory collapsed in the late 1830s, she returned home to help the family and worked as a teacher.

The family moved to a Rochester farm in the mid-1840s and joined the abolitionist movement, and their farm housed famous abolitionists. At that time, at the age of 26, Anthony became the director of the women’s department at Canajoharie Academy. At the teachers’ conventions, she advocated for equal educational opportunities regardless of race and gender, demanded that all schools, colleges and universities open their doors to women, ex-slaves and their children, and demanded better pay for teachers.

After leaving the Canajoharie Academy in 1849, Anthony began devoting more time to social issues. In 1851, she took part in a conference against slavery where she met Elizabeth Cady Stanton with whom she has since had a special friendship. 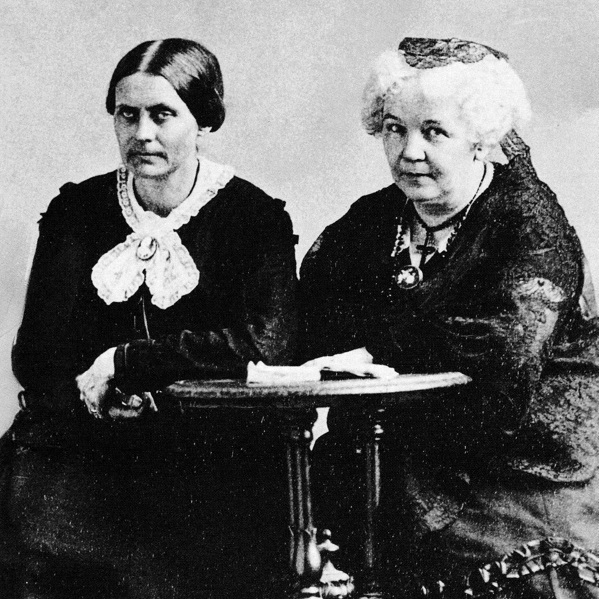 She also participated in the movement to ban the production and sale of alcohol, and after she was banned from speaking at a convention banning alcohol on the basis of gender, she became involved in the fight for women’s rights. She felt that no one would take women in politics seriously until they were given the right to vote. Susan B. Anthony also advocated for women’s clothing reform. She cut her hair and wore a bloomer dress for a year, but they convinced her that it distracted people from the goal she was advocating.

In 1853, Anthony launched a campaign for women’s right to property in New York State. She spoke at rallies, collected signatures and lobbied lawmakers. Thanks to her efforts, the state of New York passed a law in 1860 that allowed married women to own, receive a salary, and receive custody of their children. Susan B. Anthony and Elizabeth Cady Stanton also advocated for more liberal divorce laws.

In 1856, Anthony began working as a member of the American Society Against Slavery. She arranged meetings, gave speeches, pasted posters and handed out leaflets, often encountering threats and aggressive outbursts.

After the Civil War, Anthony focused more on women’s rights. In 1866, she started the Society for Equal Rights with Stanton. Together, they also published The Revolution, a weekly that lobbied for women’s rights, eight-hour working hours, and equal pay for equal work. The motto of the newspaper was “Men, their rights and nothing more; women, their rights and nothing less”.

In 1868, Susan B. Anthony encouraged New York workers who could not join men’s unions to form the Workers’ Association.In 1869, Anthony and Stanton founded the National Association of Suffragettes. Anthony tirelessly gave speeches across the country. She even voted illegally in the presidential election in 1872, for which she was arrested along with several other women. The judge ordered the jury to convict her without a hearing. He fined her $ 100, but did not arrest her when she refused to pay, thus preventing her from appealing. She never paid the fine.

In the early 1880s, Anthony published the first volume of History of Woman Suffrage, a project she worked on with Stanton, Ida Husted Harper, and Matilda Joslin Gage. She helped Harper write her story, which was published in 1898 in The Life and Work of Susan B. Anthony: A Story of the Evolution of the Status of Women.

Anthony never gave up the fight for women’s rights. In 1905, she met with President Theodore Roosevelt in Washington to lobby for an amendment to give women the right to vote. She died the following year at her home in Rochester, and shortly before her death, she told her friend Anna Shaw: “For more than 60 years I have fought hard for a little freedom. To die without it seems so cruel.”

It was not until 14 years after her death, in 1920, that the 19th Amendment to the American Constitution was passed, giving all adult women the right to vote. In honor of Susan B. Anthony, the Treasury Department in 1979 placed her portrait on a one-dollar coin making her the first woman to be awarded that honor. During the recent presidential election, people paid tribute to her by gathering at her grave – the event was available online.