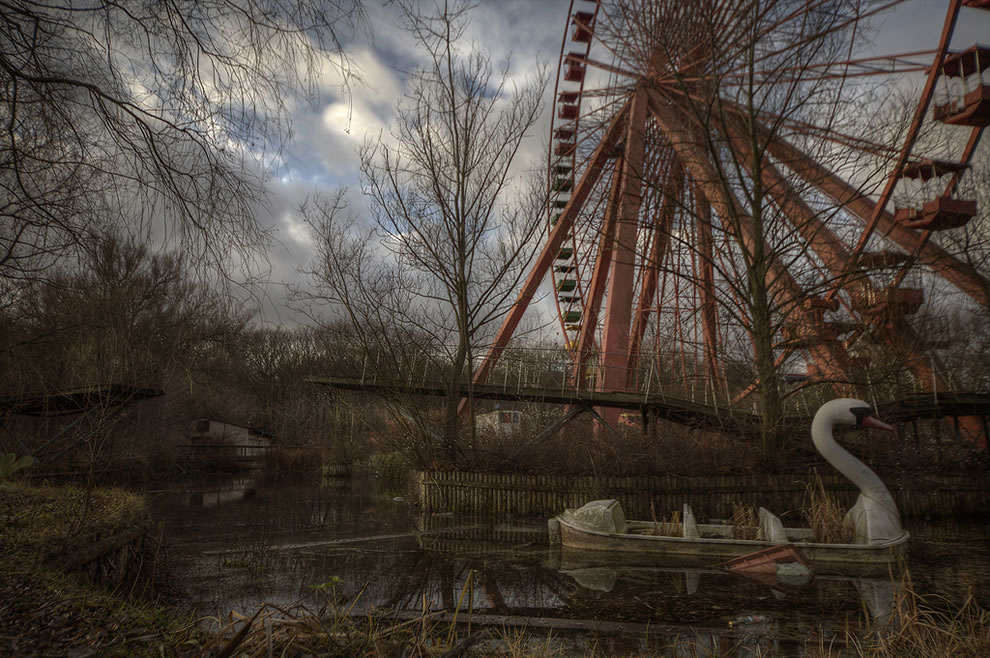 Not giving any clues, the dizzying silence filled Nix’s ears with dread as he lay, eyes closed. Did I wake up, or wake up? What does the air smell like? He took a deep breath. Dust. Good! He wiggled his body a little, testing to see if it would meet the warmth and pleasant touch of his dream-wife lying next to him, or the cold callous reassurance of the metallic dreambed.

It was the latter. Nix shot out upwards zealously, almost hitting his head on the gun rack above the bed. I’m back! He took a look at his surroundings, remembering.

This was his seventh time waking up in this… place. “Billy’s Amusing Amazement Park”, the huge sign read. Whaaat a clever name, Nix didn’t hold back his sarcasm. An abandoned amusement park from the early 2000’s, by the looks of it, but it was riddled with dreambeds. Those weren’t invented until the 30’s, right? He never woke up in the same one twice. This time, it was the one at the cowboy shooting range, with the play-pretend guns and the cans and the plushy toy prizes for the kids.

He looked at the metallic cubes comprising the dreambed, green lights flickering from the sides. Its grim futuristic look, in contrast to the natural tones of the wooden construction where it was lodged, made Nix think of a classic cartoon he watched in dream-life with Taz, about toys coming to life when nobody is watching. What was its name? He couldn’t bring the memory back, the dream fleeting away a silent butterfly.

The first time he woke up in the park was the most painful. It got a tiny bit easier every time he was back, but he still remembered that first instant of sudden realization and ensuing void. Of knowing, without knowing how or why you know, that every memory in your mind is a mirage created by these stupid metalic cubes. Wanda, his beautiful wife; Taz, their son, who grew up to become an aerospace engineer. Their house and their neat backyard, their dog, Rocket. Taz’s highschool girlfriend who left him for his rival. Nix’s job at the university. None of it ever happened. What really unnerved him, though, was the absence of other memories. If I didn’t have that life, I must have had something else? But there was nothing, no remembrance, no thought; just an emptiness of certainty, not needing any proof: Wanda and Taz never existed. Only this god-forsaken park.

He had to remember that.

Up until now, every visit, as he called them, Nix didn’t get very far from where he woke up. The fake memories would swell up inside him, every loving moment, every angry moment, every grieving, thankful, hopeful, sad, miserable, beatiful, joyful memory of life with his family, a rollercoaster of simultaneous emotions that never existed… He would sit motionless, trying to make sense of it, trying to find a purpose, a tear rolling down his cheek. Then it would hit him: Even if it’s not real, I want to go back.

And he would. As soon as that thought would enter his mind, he would wake right back up, lying next to Wanda, or, even better, alone in bed with the smell of coffee and freshly baked croissants in the morning air; images of Billy’s Amazement Park drifting safely away from consciousness.

But not this time! He barely came back from dreamland, barely remembered to do a reality check. He wouldn’t think it. He doesn’t want to go back. If it is all a lie, what is the point? Instead of endlessly going back and waking up, maybe he could look for a way out of the park, find out what he is doing here in the first place. He felt an eery chill creep over him. He couldn’t place it, but it had to have something to do with the uncertainty of memory. How easy it is for us to convince ourselves something has happened when it has not.

This time, he was ready to get to the bottom of it. No more crying to go back, he would find out what was real even if it killed him.

Ready to explore, Nix jumped over the stand of the shooting range, spontaneously doing a somersault in mid-air. What the devil? I don’t remember being able to do that. In dreamworld, he was fifty. He looked down at his hands, expecting to see the manicured and soft hands of a university professor. Instead, he saw rough and agile hands that could belong to a sailor or firefighter, fingers strong, grip firm. He looked around, trying to find a mirror.

Now that he was out from under the wooden shade, he could see Billy’s park sprawled in front of him. The hot dog stand right across from the range; behind it, the empty fountain, on its top the defiant statue of a space-trooper hinting at the fountain’s former glory; behind that, the road which split in three directions. He couldn’t see where they went from this vantage point, but he knew that the left road led to a mirror maze, the middle one to the house of horrors, and the right one to the ferris wheel. He had woken up at dreambeds at all three except for the wheel. He knew the wheel was there, though, its white circular shape visible even from this distance, outlined against the stormy clouds. I should go – he thought, uncertain of the origin of the impulse.

He decided he could travel the distance in one jump. He coiled up his body, every muscle, ligament and tendon cooperating to give one explosive burst of electrical energy that threw him violently towards the sky.

Man, I KNEW this was a dream too. It has to be, right? – he thought, flying upward. As he reached the peak of his flight, he saw the giant sign of the amusement park down below him. “Tully’s Amazing Zoo”, it read. Yeah, fuck you too. As he was hurtling towards the ground, he knew he had to.

I want to go back.

He woke up to the smell of freshly ground coffee roasting deliciously in the kitchen.